Jazz Winnipeg has lost its Groove.

TD has sponsored Jazz Labs (a series of workshops), Jazz on Wheels and green initiatives since 2003 and Jazz Winnipeg executive producer Paul Nolin calls the title sponsorship "a huge step for Jazz Winnipeg."

The value of the sponsorship is not being released and spans five years through 2014.

TD becomes presenting sponsor of the Montreal International Jazz Festival next year as well, and adds Victoria to a list of sponsorships that includes the Vancouver, Toronto, Ottawa and Halifax jazz festivals.

Groove FM held the sponsorship since 1994 (starting when the station was Cool FM, under the Canwest umbrella, before being bought by Corus).

Pianist Keith Jarrett has spent decades reinventing the solo jazz concert -- with every solo performance and recording he makes.

The pianist's latest solo set, the three-disc Testament, Paris/London (ECM) is close to three hours of stream of consciousness with touches of classical, jazz and gospel recorded at Salle Pleyel, Paris, and Royal Festival Hall, London, in late 2008.

The pieces here, simply numbered, are relatively short (from four to 14 minutes) compared to some of his marathon solos of the past.

Jarrett, in the liner notes (unusual for ECM), describes the concert tour as cathartic after his wife of 30 years left him. He recounts leaving the stage in tears.

He has a close rapport with his audiences, and the smaller blocks of music are clearly long enough to convey his love for, and his emotional effort and commitment to, spontaneously composed music.

While both concerts begin in dark musical territory, the Paris show swings to freer spaces, and London is more emotional. The French audience on disc 1 gets some Parisian jazz ambience; the Londoners on discs 2 and 3 get more frenetic playing.

Jarrett confirms his role as a solo performer extraordinaire on these stellar recordings.

The U of W Downtown Vocal Jazz Group and Downtown Jazz Band will hold a joint concert Sunday, Dec. 6, 7 p.m., in the university's Eckhart-Gramatté Hall.

The University of Winnipeg doesn't have a music program so the choirs and big band are mostly arts and science students who sing or play an instrument simply for pleasure. But there are non-university members as well, says Helen White, director of the choirs, whose repertoire runs from mostly jazz standards to pop tunes.

Tickets are $10 at the door or by email at jazz@uwinnipeg.ca.

The big band is looking for players, director Rob Hrabluk says. Current U of W students are first choice, but it is not limited to university-age students. There is no audition process and musicians should have a strong desire to play, he said, adding some recent experience is an asset. Contact Hrabluk at robert.hrabluk@lrsd.net

Local jazz magazine dig! is holding an old-fashioned rent party as a fundraiser as it enters its sixth year of publication.

The magazine, which features music listings, interviews and features, is published by Jazz Winnipeg and edited by Steve Kirby, director of jazz studies at the University of Manitoba's faculty of music.

The magazine is available six times a year at coffee shops and book stores for no charge. The rent party is at the Park Theatre, 7:30 p.m., Sunday, Dec. 6. Tickets are $20, available through Jazz Winnipeg and McNally Robinson Booksellers, or at the door. 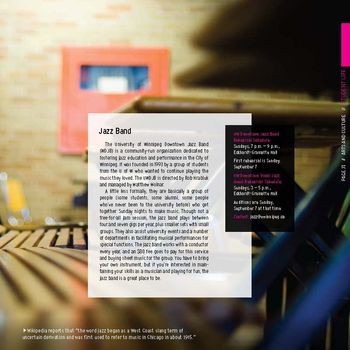 our man in paris

In his book, The Year Before the Flood: A Story of New Orleans, Ned Sublette says, “If you’ve never been on a second line, there’s something about jazz you don’t know.” The second line became very apparent to me this summer when I was in New Orleans with Habitat for Humanity, rebuilding homes damaged by Hurricane Katrina. While I was there, “Uncle” Lionel Batiste passed away. He was the debonair bass drummer in the Treme Brass Band, a second line legend, and a central figure in the New Orleans music scene.

His Second Line service began at Tuba Fats Square, marched by Congo Square, and wound through the famous streets of the NOLA district. People of all races, colours, creeds, and religions joined in on the remembrance until there was no room in the street and barely any room on the sidewalks. The Treme Brass Band played and everyone else used the one instrument they had on them—their voice.

I caught up with Ashley and asked her a few questions about the historic Preservation Hall:

Can you provide a short history on Preservation Hall?

Located in the heart of the French Quarter, Preservation Hall was established in 1961 by Allan and Sandra Jaffe, with the dual intention of preserving this uniquely American art form and providing some of its earliest practitioners the opportunity to earn a living performing the music they had pioneered and kept alive for so many years. To this day, Preservation Hall’s nightly performances are recognized as some of the world’s last “pure musical experiences,” presenting authentic, traditional New Orleans Jazz played by some of the city’s finest musicians.

The building that currently houses Preservation Hall was originally built in 1817, with portions of the structure dating as far back as the 1750s. Over the course of the building’s existence, it has served a variety of purposes including a private residence, a tavern, and a photo studio. In the 1950s, the room that currently houses Preservation Hall’s nightly performances served as the Associated Artists Gallery, owned and operated by Larry Borenstein. Borenstein first hosted some of the city’s most historical musicians in informal performances, generating business for the gallery and tips for the musicians. These early informal performances served as the concept for Preservation Hall.

How did you step into your role at Preservation Hall?

I started at Preservation Hall five years ago as an intern. I had first wondered how a building and business could survive this long in the French Quarter without selling drinks or food. Recalling my own awe about the venue and the music, I realized that’s all it needs to keep it alive.

One of the dreams of the owner, Ben Jaffe, and his wife Jeanette, was to bring back the educational programming that had been defunct since before Hurricane Katrina. We all agreed it was the best way to make sure the legacy of New Orleans Jazz lived on. In 2010, The Preservation Hall Jazz Band recorded Preservation to help create initial funding. Last May, we started the program.

What concepts does the Outreach Program focus on?

Our outreach program has many facets, the most prominent being our free weekly classes and free private lessons. Our students are broken into groups based upon skill level. We focus primarily on repertoire, music theory, improvisation, and music history as it relates to traditional New Orleans jazz. Unlike most programs, our students work primarily by ear, in the same manner traditional New Orleans jazz has been taught and passed down through generations before them.

Preservation Hall musicians do come in and work with the kids in the Outreach Program, and each of them brings their preference on what songs are important and how the songs should be played. I always find it fascinating, as they each have their own experiences and a different style of teaching. What remains constant is the warm and sharing atmosphere.

What have you learned from the Preservation Hall experience?

I’ve been told many things and seen many things through this musical tradition, but something I’ll always take from it is that music is a living, breathing art form, and you’ll always be able to learn something new from it every day.

Staff and students at Island Lakes Community School have played their part in helping women and their families in a ravaged nation half a world away.

At the end of the last school year, the school community held its annual gala — and also produced a five-track album — in support of the Manitoba Chapter of Canadian Women for Women in Afghanistan (CW4WAfghan). In the end, the school raided $1,293.40 for the cause.

CW4WAfghan is a member-based, non-profit organization founded in 1996 with 13 volunteer chapters across Canada. Its goal is to raise awareness among Canadians of the plight of women in Afghanistan from a human rights perspective and fundraise to advance education and educational opportunities for Afghan women and their families.

"I was totally amazed when their teacher, Rob Hrabluk, called me to see if someone could come and talk to the students, saying that Grade 6 to 8 students had chosen our organization to be the recipient of their yearly gala," said Lois Edwards, co-chair of the organization’s local chapter.

"These kids worked very hard on this project in preparation for the gala. For example, they did Internet research, made posters and held bake sales. One afternoon, I spoke to 180 students and was extremely impressed with what Rob had done with the students and with the students themselves for their knowledge of Afghanistan."

"They had done their research about how much it would cost for food or library books in Afghanistan. And they put up posters in the classrooms and the hallways. They even made a sandwich board to advertise the event. I was amazed and impressed," added Edwards, who lives in River Heights.

To prepare for the event, Grade 8 student Nikki Yakubowski said the students divided up into groups and chose different fundraisers. Her group sold freezies during lunch hours.

Grade 8 student Robin Mann, who was involved in auditioning and selecting entertainment acts for the gala, said he was inspired by Deborah Ellis’ 2001 children’s novel titled The Breadwinner, which features an 11-year-old protagonist who is forced to be the breadwinner for her family in wartorn, Taliban-era Afghanistan.

"I was surprised how the girls weren’t allowed to go to school and I was shocked about that," Mann said.

Hrabluk, a language arts and music teacher at the school, said the fundraiser began to build momentum when he introduced The Breadwinner into the classroom in the first term of the school year and he was proud to collaborate with the students to produce a five-track CD called In Loving Memory.

"The project definitely helped build awareness of what’s going on in the world and it gave the students a chance to learn and pass this knowledge on to their parents," said Hrabluk, who lives in North Kildonan.

"There’s a great spirit and atmosphere and awareness of global issues at the school. And, of course, it was fun, too. If we can make it fun to help these causes, it helps foster a hands-on, face-to-face approach."

To learn more about CW4WAfghan, visit www.cw4wafghan.ca To check out In Loving Memory, go to iTunes and search for Robert Hrabluk.

Simon Fuller is the community journalist for The Lance. Email him at simon.fuller@canstarnews.com 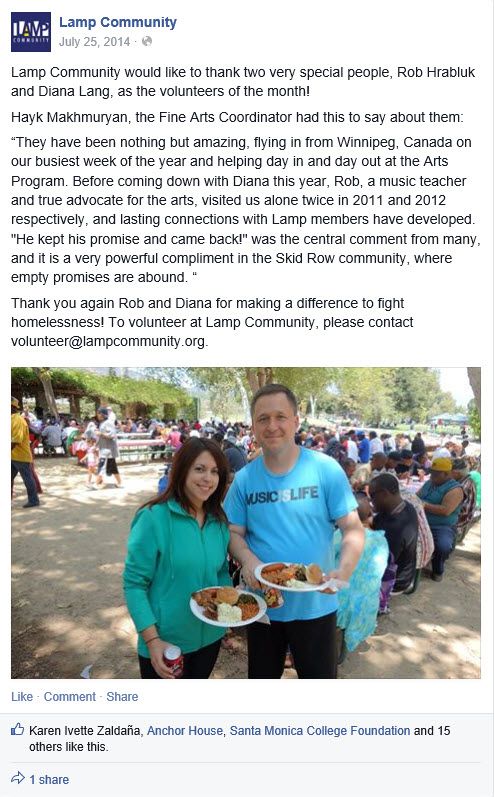